The Swindon Symphony Orchestra was formed in the spring of 1989. At that time there was no local orchestra in the town, and a prominent local musician, John Birkin, thought it would a worthwhile project to form a group to put on a concert to raise money for the Wiltshire Youth Orchestra, who were due to undertake a large concert tour of Germany, Austria and Hungary later that year. 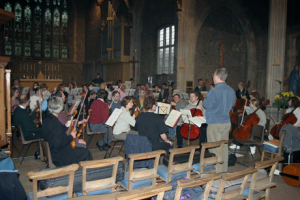 The orchestra thoroughly enjoyed rehearsing for and giving that concert, which included Verdi’s Force of Destiny Overture, Beethoven’s Emperor Concerto and Mahler’s 5th Symphony, so it was decided to continue the orchestra as an ongoing concern.

Since then the orchestra has given many concerts, normally two or three each year, usually in support of either local charities, or charities suggested by its members. It has also joined in with other local groups to give joint concerts, for example the memorial concert, which also included a local choir, for David Gow, the Wiltshire composer who was a great support for the orchestra in its early days, and who wrote a work for the orchestra which was given its first performance on that occasion as part of the programme for the evening. The orchestra has also supported the Swindon Male Voice Choir in a joint concert, and a small group of string players from the orchestra have provided support for a concert giving by the Thamesdown Ladies Choir. In the summer of 2000, a joint concert was given by the Stroud Symphony Orchestra and the Swindon Symphony Orchestra as part of Stroud Festival, in which the major work was Holst’s Planets Suite.
Share this!